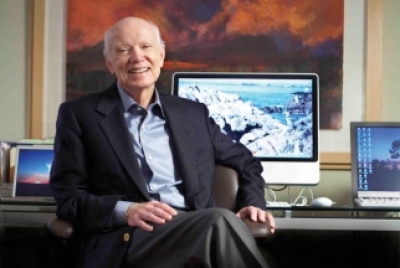 Regis McKenna is a marketer who introduced many of the ideas that are now part of the mainstream in technology marketing and who helped launch some of the major technical innovations of the computer age, including the first microprocessor (Intel Corporation), Apple's first personal computer (Apple Computer), the first recombinant DNA genetically engineered product (Genentech, Inc.), and the first retail computer store (The Byte Shop).

Among the entrepreneurial start-ups with which he worked during their formative years are America Online, Apple, Compaq, Electronic Arts, Genentech, Intel, Linear Technology, Lotus, Microsoft, National Semiconductor, Silicon Graphics, and 3COM. He has been described as the man who put Silicon Valley on the map.[2] He has been called “Silicon Valley's preeminent public relations man,” a “guru,” a “czar,” a “philosopher king,”a “legendary marketer,” Apple's “marketing guru,”“the fellow that put Intel and Apple on the map,” and “ a pioneer in the semiconductor BUSINESS in terms of the marketing side of things.”Newsweek called him “the Silicon Valley Svengali”and BUSINESS Week has called him “one of high-tech's ace trendspotters” and a “marketing wizard in Silicon Valley.”

According to a 1985 article in the Los Angeles Times, McKenna is “best known for taking the story of Apple Computer's founding in a Los Altos garage by a couple of young entrepreneurs and weaving the tale into part of our national folklore.“McKenna's power comes from the fact that good public relations are crucial for hundreds of small technology-oriented start-up companies,” wrote the Times. Robert Henkel, editor in chief of Electronics magazine and former technology editor of BUSINESS Week, told the Times that McKenna was “the best p.r. man around in the high-technology business.”

Born and raised in Pittsburgh, Pennsylvania, McKenna attended Saint Vincent College and is a liberal arts graduate of Duquesne University. He later said that he “had a dispute with the university over credits” and that Duquesne “eventually sent me my degree,” although “I went to four different universities to get that degree.” He ended up receiving an honorary Ph.D. from Duquesne in 1990.

He first went to Silicon Valley in 1962, where he worked in the marketing department of General Microelectronics, a spinoff of Fairchild that started developing MOS technology. He then went to work as manager of marketing services for National Semiconductor in 1967, a firm that grew very quickly. He spent “half of my time on the road... in Europe and other places around the world... helping set up operations in Scotland.” It was there, he said, that he learned a great deal about marketing simply by doing it.

McKenna wrote a 2001 article entitled “Silicon Valley Isn't a Place as Much as It Is an Attitude.” Describing the Valley as “this near mythical garden became the place where anyone could pursue and achieve his or her heart's delight,” he said that its early “inventors and entrepreneurs...didn't set out to achieve wealth or even happiness” but “sought the freedom to exercise their talents free of economic, cultural, or tenure constraints.” The result was the unplanned evolution of a “new, egalitarian culture.”

McKenna founded Regis McKenna, Inc., in 1970. He went on to work for Intel and then Apple. He later recalled that “Apple wasn't happy with the name Apple after they got going and growing. They actually looked at IBM and said, 'We don't look like IBM. We're not, you know, dignified.'” McKenna made a two-hour presentation to Apple's employees in which he said: “That's exactly what you do want. You want to be different from IBM. You don't want to be the same. You don't want to emulate them. You want to do all of the things that distinguish you from them.”

He began working with Apple in 1976. In that year, Steve Jobs and Steve Wozniak “approached [him] and asked for help in launching what was to be the world's first personal computer.” He agreed, because he “liked Apple's vision.”[6] A 2012 article explains that “When a young Steve Jobs needed a marketing expert, he called Intel to ask who made their sharp-looking ads and was told 'Regis McKenna.'”.[7]

In addition to marketing consultancy, McKenna also owned an advertising agency and a public relations company. “So not only did we write their first BUSINESS plan, we also designed the Apple logo and put together their advertising campaigns.”McKenna was the mastermind behind Apple's famous 1984 television commercial.

Aside from Intel and Apple, among the startups that the firm assisted in their formative years included America Online, Electronic Arts, Genentech, National Semiconductor, Silicon Graphics, and 3Com Corporation. Over the years, the firm evolved from a high-tech outsource marketing business focusing on startups to a broad-based marketing strategy firm servicing international clients in many different industries. McKenna sold his interest in the firm in 2000.

McKenna pioneered many of the theories and practices of technology marketing that have become integrated into the marketing mainstream. Some of these include:

The process of diffusing technology across various classes of users ranging from innovators to early adopters to late adopters and laggards and the corresponding evolution of the “whole product.”

The development of industry infrastructure modeling whereby a relatively small number of “influencers” establish and sustain standards. The focus on “intangibles” as the benefits of technology products.

The development of “other” as a major, growing segment of market share with the result of “choice becoming a higher value than brand.”

The development of the concept of "Real Time," whereby technology compresses time (from want or need to zero), creating "the never satisfied consumer".

McKenna wrote in 1990 that “Technology is transforming choice, and choice is transforming the marketplace. As a result, we are witnessing the emergence of a new marketing paradigm.” In a 2002 article, he declared that “branding (as currently practiced) is dead.”

A 2012 article entitled “How Regis McKenna Defined Real-Time Marketing” explained that real-time marketing “is a way of thinking and philosophy that requires BUSINESSESto meet the demands of an always-on digital world” and that “includes the convergence of search, social, and real-time content production and distribution, with an expanded definition of publishing that makes social conversation and interaction as important as actual writing and digital media development.” McKenna, it was explained, “laid the groundwork for real-time marketing back in 1995” in a paper for the Harvard Business Review, and fleshed out the concept in the 1997 book Real Time.

Regis McKenna, a Silicon Valley marketing guru, shares some of his earliest and fondest memories from his friendship with the late Apple CEO, Steve Jobs.

This event is part of the Museum's acclaimed Revolutionaries speaker series, featuring renowned innovators, business and technology leaders, and authors in enthralling conversations often with leading journalists. Our audiences learn about the process of innovation, its risks and rewards, and failure that led to ultimate success.

Regis McKenna from RMI and Don Valentine from Sequoia talking about Apple Computer and relationship building. Who was the commercial for? You'll be surprised.
More in this category: « Jay Conrad Levinson Jack Trout »
back to top