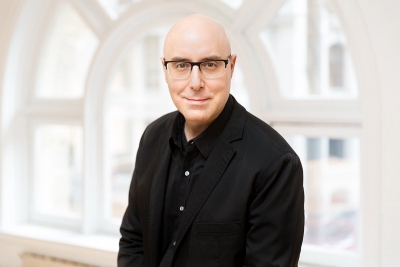 Mitch Joel (born in May, 1971) is a journalist and publicist. He is president of Twist Image, a digital marketing agency and president and a founding partner of Distort Entertainment.

He started with a music program at Vanier College (he played bass), then he started a publishing career. He worked as a freelance music journalist and he became a publisher/editor of two music magazines, Arena Rock and Enrage.

In 1999 and 2000 he worked at Mamma.com, a meta search engine started in 1996, where he held the title of Director, Sponsorship and Advertising. In January 2001 he became Director of Marketing at Airborne Entertainment, a mobile content provider headquartered in Montreal.

In 2002, Joel joined Twist Image, a digital marketing company that was then two years old. He is now president of the company, one of four equal partners.

He began blogging in September 2003, posting at Six Pixels of Separation – The Twist Image Blog. In May, 2006, he launched a weekly podcast. Both the blog and podcast focus on the intersection of digital marketing and personal branding.

He was named one of the twenty most influencial authorities in the world on the topic of blog marketing by UK-based research firm Onalytica. Marketing Magazine called Joel "Canada's Rock Star of Digital Marketing." In May 2009 he was named to the Top 40 under 40 in Canada.

By mid-2009, Twist Image had a second office, in Toronto, and employed 65 people. By October 2009 it had 90 employees. By the end of 2009, its clients included Home Depot, Microsoft, Scotiabank, TD Canada Trust, Fujifilm, and Dairy Farmers of Canada.

In 2013, Joel published Ctrl Alt Delete: Reboot Your Business. Reboot Your Life. Your Future Depends on It. The book covers five technology and marketing trends that Joel thinks business leaders must embrace.

He has been called a marketing and communications visionary, interactive expert and community leader.

The future of the web may not be social
More in this category: « Laura Reis Yaro Starak »
back to top