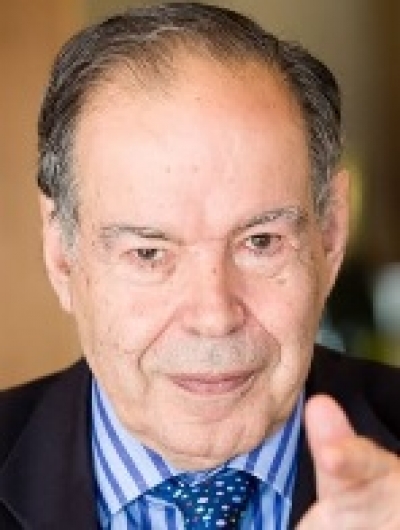 Edward de Bono (born 19 May 1933 in Malta) is a Maltese physician, psychologist, author, inventor and consultant. He originated the term lateral thinking, wrote the book Six Thinking Hats and is a proponent of the teaching of thinking as a subject in schools.

Edward Charles Francis Publius de Bono was born in Malta on 19 May 1933. Educated at St. Edward's College, Malta De Bono then gained a medical degree from the University of Malta. He studied at York University, Toronto, and later was a Rhodes Scholar at Christ Church, Oxford, where he gained an MA in psychology and physiology. He represented Oxford in polo and set two canoeing records. He also has a PhD degree in medicine from Trinity College, Cambridge, a DDes (Doctor of DESIGN) from the Royal Melbourne Institute of Technology, and an LLD from the University of Dundee.

Professor de Bono has held faculty appointments at the universities of Oxford, Cambridge, London and Harvard. He is a professor at Malta, Pretoria, Central England and Dublin City University. De Bono holds the Da Vinci Professor of Thinking chair at University of Advancing Technology in Tempe, Arizona, USA. He was one of the 27 Ambassadors for the European Year of Creativity and Innovation 2009.

He has written 57 BOOKS with translations into 34 languages. He has taught his thinking methods to government agencies, corporate clients, organizations and individuals, privately or publicly in group sessions. He has STARTED to set up the World Center for New Thinking and Peace Studies, based in Malta, which he describes as a "kind of intellectual Red Cross".

In 1995, he created the futuristic documentary FILM, 2040: Possibilities by Edward de Bono, depicting a lecture to an audience of viewers released from a cryogenic freeze for contemporary society in the year 2040.

Schools from over 20 countries have included de Bono's thinking tools into their curriculum, and he has advised and lectured at board level at many of the world's leading corporations.

Convinced that a key way forward for humanity is better language, he published "The Edward de Bono Code BOOK" in 2000. In this book, he proposed a suite of new words based on numbers, where each number combination represents a useful idea or situation that currently does not have a single-word representation. For example, de Bono code 6/2 means "Give me my point of VIEW and I will give you your point of view." Such a code might be used in situations where one or both of two parties in a dispute are making insufficient effort to understand the other's perspective.

In 2005, he was shortlisted for the Nobel prize in Economics.

Creative Innovation is an annual future-shaping conference event. It is the place to learn from world-changing innovators, futurists, inspired thinkers and curious souls gathered together in an interactive community. Our next conference will take place 28-30 November 2012 at Sofitel Melbourne On Collins. To receive updates, please register your interest at http://www.creativeinnovationglobal.c.. If questioned today, many people would say the biggest problem facing humanity is Climate Change. According to de Bono, this is not true. The biggest problem facing humanity is our poor thinking... The only bigger problem is that we don't realise this.

Humour is the most significant dimention of brain - Edward de Bono

Let's tap into our creative sides now ... as we meet the man who has taught whole nations how to put their thinking caps on.

Edward de Bono on innovation vs creativity how's it different

Edward de Bono on innovation vs creativity People confuse creativity with innovation - how's it different "Innovation is doing new things. Creativity is thinking up new things" Theodore Levitt Edward de Bono is regarded by many as the leading authority in the field of creative thinking, innovation and the direct teaching of thinking as a skill. He is equally renowned for his development of the Six Thinking Hats technique and the Direct Attention Thinking Tools. He is the originator of the concept of Lateral Thinking, which is now part of language.
More in this category: « Hermann Simon Martin Lindstrom »
back to top