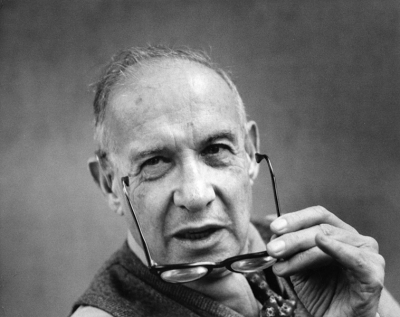 Drucker's Peter Ferdinand Drucker (November 19, 1909 – November 11, 2005) was an Austrian-born American management consultant, educator, and author, whose writings contributed to the philosophical and practical foundations of the modern business corporation. He was also a leader in the development of management education, he invented the concept known as management by objectives, and he has been described as "the founder of modern management".

Drucker's books and scholarly and popular articles explored how humans are organized across the business, government, and nonprofit sectors of society. He is one of the best-known and most widely influential thinkers and writers on the subject of management theory and practice. His writings have predicted many of the major developments of the late twentieth century, including privatization and decentralization; the rise of Japan to economic world power; the decisive importance of marketing; and the emergence of the information society with its necessity of lifelong learning. In 1959, Drucker coined the term “knowledge worker," and later in his life considered knowledge-worker productivity to be the next frontier of management. Peter Drucker gave his name to three institutions: the Drucker Institute and the Peter F. Drucker and Masatoshi Ito Graduate School of Management, both at Claremont Graduate University, and the Peter F. Drucker Academy. The annual Global Peter Drucker Forum in his hometown of Vienna, honors his legacy.

Peter Drucker was of Jewish descent on both sides of his family, but his parents converted to Christianity and lived in what he referred to as a "liberal" Lutheran Protestant household in Austria-Hungary. His mother Caroline Bondi had studied medicine and his father Adolf Drucker was a lawyer and high-level civil servant. Drucker was born in Vienna, Austria, in a small village named Kaasgraben (now part of the 19th district of Vienna-Döbling). He grew up in a home where intellectuals, high government officials, and scientists would meet to discuss new ideas.

After graduating from Döbling Gymnasium, Drucker found few opportunities for employment in post-World War I Vienna, so he moved to Hamburg, Germany, first working as an apprentice at an established cotton trading company, then as a journalist, writing for Der Österreichische Volkswirt (The Austrian Economist). Drucker then moved to Frankfurt, where he took a job at the Daily Frankfurter General-Anzeiger. While in Frankfurt, he also earned a doctorate in international law and public law from the University of Frankfurt in 1931.

In 1933, Drucker left Germany for England. In London, he worked for an insurance company, then as the chief economist at a private bank. He also reconnected with Doris Schmitz, an acquaintance from the University of Frankfurt, and they married in 1934. The couple permanently relocated to the United States, where he became a university professor as well as a freelance writer and business consultant.

In 1943, Drucker became a naturalized citizen of the United States. He then had a distinguished career as a teacher, first as a professor of politics and philosophy at Bennington College from 1942 to 1949, then twenty-two years at New York University as a Professor of Management from 1950 to 1971.

Drucker died November 11, 2005 in Claremont, California of natural causes at 95. He had four children and is the grandfather of tech entrepreneur Nova Spivack, one of six grandchildren. Doris Drucker died in October 2014 (103 years old)

Interview made in the 1990s during production of “An Immigrant’s Gift.” © WoodsEnd, Inc., & G. Howland Blackiston. Commercial use prohibited.
More in this category: « Thomas J. "Tom" Peters Wroe Alderson »
back to top