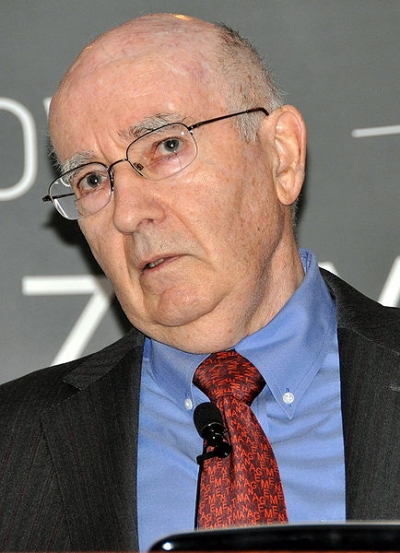 Philip Kotler (born May 27, 1931 in Chicago, Illinois) is an American marketing author, consultant, and professor; currently the S. C. Johnson Distinguished Professor of International Marketing at the Kellogg School of Management at Northwestern University. He is the author of over 55 marketing books, including Principles of Marketing, Kotler on Marketing: How to Create, Win, and Dominate Markets, and Marketing 3.0: From Products to Customers to the Human Spirit. Kotler describes strategic marketing as serving as "the link between society's needs and its pattern of industrial response."

Both of Kotler's parents emigrated in 1917 from Ukraine and settled in Chicago, where Kotler was born on May 27, 1931. He studied at DePaul University for two years and was accepted without a bachelor's degree into the Master's program at the University of Chicago (1953) and his PhD at Massachusetts Institute of Technology , earning both degrees in economics. He studied under three Nobel Laureates in Economic Science: Milton Friedman, Paul Samuelson, and Robert Solow. He did a year of postdoctoral work in mathematics at Harvard University and in behavioral science at the University of Chicago.

Kotler started teaching marketing in 1962 at the Kellogg School of Management, Northwestern University. He believed marketing was an essential part of economics and saw demand as influenced not only by price but also by advertising, sales promotions, sales forces, direct mail, and various institutions (agents, retailers, wholesalers, etc.) operating as distribution channels.

In 2003, the Financial Times cited Kotler's three major contributions to marketing and to management:

First, he has done more than any other writer or scholar to promote the importance of marketing, transforming it from a peripheral activity, bolted on to the more "important" work of production. Second, he continued a trend started by Peter Drucker, shifting emphasis away from price and distribution to a greater focus on meeting customers' needs and on the benefits received from a product or service. Third, he has broadened the concept of marketing from mere selling to a more general process of communication and exchange, and has shown how marketing can be extended and applied to charities, political parties and many other non-commercial situations.

Kotler argued for broadening the field of marketing to cover not only commercial operations but also the operations of non-profit organizations and government agencies. He held that marketing can be applied not only to products, services, and experiences, but also to causes, ideas, persons, and places. Thus a museum needs the marketing skills of Product, Price, Place, and Promotion (the 4P's) if it is to be successful in attracting visitors donors, staff members, and public support. Kotler and Gerald Zaltman created the field of social marketing, which applies marketing theory to influence behavior change that would benefit consumers, their peers, and society as a whole. Kotler and Sidney Levy developed the idea of demarketing, which organizations must employ to reduce overall or selective demand when demand is too high. Thus, when water is in short supply, the government needs to persuade various water consumers to reduce water usage so that enough water will be available for essential uses.

Philip Kotler: 8 Ways to Market Your Way to Growth

8 Ways to Market Your Way to Growth. WOBI - World of Business Ideas

Philip Kotler, best known for the marketing principle of the four Ps—product, price, promotion, and place—takes us on a guided tour of American marketing, including its origins and trends, its relationship to economics, and its criticisms. His talk will include examples of exemplary marketing.
More in this category: « Seth Godin Steve Jobs »
back to top